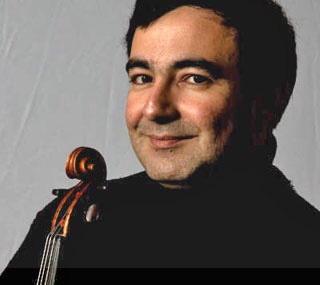 Theophanis Dymiotis (3 April 1965 — 10 March 2007) was born in Cyprus and grew up in Nicosia. He began playing the mandolin and recorder in fourth grade, and at age nine the violin, which became his primary instrument. He began composing at the age of ten.

At fourteen, Phanos went to Manchester, England to attend Chetham’s School of Music. He graduated with First Class Honors in Music from Cambridge University and also held a Ph.D. in Composition from Princeton University. Phanos taught music theory and composition at Goucher College and Towson University before leaving academia to devote himself full-time to performance and composition. He was a much-loved violin teacher at McDaniel College and a member of the Mariner String Quartet. He performed regularly with the Annapolis, Delaware and Mid-Atlantic Symphony Orchestras, the Baltimore Opera Company and also as a recitalist and soloist. Phanos’ explosive virtuosity and impeccable musicianship won him the respect of audiences and colleagues alike.

His music has been described as intelligent, lyrical and witty. The Boston Globe writes, Dymiotis writes for string quartet with complex contrapuntal thickness…the music’s forward-moving thrust and long-lined and often plaintive lyricism have a Mediterranean sparkle.

Phanos’ music has been performed in Europe and the United States, and has won numerous awards. His Concertino for piano and chamber orchestra was premiered in Italy in 1997, followed by a performance in 1998 in Baltimore with Leon Fleisher conducting and Katherine Jacobson Fleisher at the piano. His brass septet of 1998 was recorded by Saint Mary’s Brass on their Sonora Records CD, Hearing the Call.

In 2004 Phanos was commissioned by the Cyprus Ministry of Education and Culture to compose a work to be performed during the celebrations of Cyprus’ European Union accession. Also in 2004 he wrote his award-winning Music for Five for oboe and string quartet. His last piece, The Soldier’s Blues, was commissioned by the Mid-Atlantic Symphony Orchestra and premiered in Chestertown, MD on 22 March 2007, twelve days after Phanos’ untimely death.

Phanos was known for his kindness, generosity and sense of humor. He was always smiling and had a penchant for puns. He enjoyed cooking, running and reading (in both Greek and English) in subjects as wide as mathematics, art history, literature, and evolutionary biology. As a violinist he was known for being able to play anything at sight. Extremely modest despite his accomplishments, he is greatly missed by his friends and colleagues throughout the world.